I have been reading a little bit on the feminist movement lately. Just to look back on where we have come from as a women and the trials and tribulations that various other prominent women fort so hard for the rights we have today!

As always all images are taken from google.com — These are not my images.

Dating back to the 1900’s women have been constantly disadvantaged by our male counterparts. It still makes me sick to think not so long in 1947 women were just given access to a  university level education therefore allowing them to access higher paid professional positions. We should of been given the same chance to start with. I have read that it was even to the point whereby a man and a women would be in the same position and the man would come back with a greater income, even if the women worked twice as hard.

During the WW2 many bread-winning men went off to fight, leaving their families to try and support themselves. Many women were forced into lower income earning positions that saw them struggle because they were not given the same rights as a man would. However, it makes me wonder why did so many women give up working for themselves when there husbands came back? I understand that this is when the whole baby boomer generation began, however, it makes you wonder why did so many women want to give up their independence?

We have come so far to back then. Just think in Australia we have our first female Prime minister, Miss Julia Gillard. The election of Gillard honestly makes me proud to be a women. There are also many examples of women in more professional roles, making ridiculous amounts of money, whom are breaking the stereotype for our future generations of women to come.

I encourage any women who is looking to start there own business to read up on the feminist movement. It is nothing but inspiring to see where we where and the progression we have made. 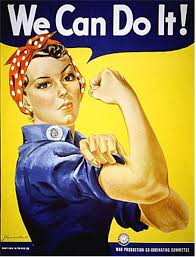 How does this relate to a confident women in the year 2013? Well with the trials and tribulations of our fellow women who are long gone, i believe it is about time that we as a young generation make these women proud, as they fort long and hard for the rights we have today!!

I constantly as a 21 year old female find that i get pressured about when are the babies coming, or people get taken back when i say to them that i want to achieve a great deal in my professional career before i settle down to become a mother.  People need to re-think about the way that females are progressing in society. Not every women wants to stay at home with the kids and not achieve what they want to in life so they feel fulfilled.

Having the power to break from the stereotype is quite a big deal for any female. As i have progressed through my life i have seen people like my mother who just down right do not look fulfilled with their lives because they have done what society has told them to do. I have also had the privilege to meet many females who progress professionally though life and who get to opportunities to do what they love. And that is the kind of women that i want to be.

Please check out this youtube channel for more information on feminism: http://www.youtube.com/watch?v=O2Xk-u8uii0&playnext=1&list=PL081CAC1C178F216D&feature=results_main

To get there though is the hard part — How does one break free from everything that society has set out for them? I believe that confidence is the answer. Confidence to be able to go the other direction and to not care what other people have to say about it. Below i have formulated a few ways that you can be more confident in the new year. Enjoy my friends!

Daily news and entertainment for African-Americans. Your one stop for all things Black America.

News, Sports, Weather, Traffic and the Best of SF

Journey of a fat girl..

Everything about WinPalace Casino

This WordPress.com site is the bee's knees

Smile! You’re at the best WordPress.com site ever

Me, my life, my observations and my passions

Readings in Ireland and World Wide!

Make Up Tips For All

It's All About Make Up Tips

This WordPress.com site is the cat’s pajamas

Musings on business and management.

Smile! You’re at the best WordPress.com site ever

A Place for Kids and Grown-Ups to Discover Books

This WordPress.com site is the bee's knees

How To Invest Money

The Concepts Behind Investing Money.

How To Make Money Online

Need Council Approval? We Are Here For You....

Not That You Asked: Unsolicited Advice